Full Name
Vivek Murthy
Company
Surgeon General of the United States
Speaking At
MINDing Your Business: SMEs (Small and Medium-Sized Enterprises) Embracing Mental Health
Speaker Bio
Vice Admiral Vivek H. Murthy was confirmed on December 15, 2014, as the 19th United States Surgeon General. As "America’s Doctor," Dr. Murthy is responsible for communicating the best available scientific information to the public regarding ways to improve personal and public health. He also oversees the operations of the U.S. Public Health Service Commissioned Corps, comprised of approximately 6,700 uniformed health officers who serve in nearly 800 locations around the world to promote, protect, and advance the health and safety of our nation and our world.

Dr. Murthy has devoted himself to improving public health through the lens of service, clinical care, research, education and entrepreneurship. The son of immigrants from India, Dr. Murthy discovered a love for the art of healing early in his childhood while spending time in his father’s medical clinic in Miami, Florida. After attending Miami Palmetto Senior High School, he received his Bachelor’s degree from Harvard and his M.D. and M.B.A. degrees from Yale. He completed his residency training at Brigham and Women’s Hospital and Harvard Medical School where he later joined the faculty as an internal medicine physician and instructor. As a clinician-educator, Dr. Murthy has cared for thousands of patients and trained hundreds of residents and medical students. He regards caring for patients as the greatest privilege of his life.

In addition to clinical practice, Dr. Murthy has two decades of experience and perspective improving health in communities around the world. He co-founded VISIONS, an HIV/AIDS education program in India and the United States, which he led for eight years. As its president, he established ten chapters with hundreds of volunteers in both countries and grew the organization’s education programs to reach more than 45,000 youth. Dr. Murthy also co-founded the Swasthya project (“health and wellbeing” in Sanskrit), a community health partnership in rural India, to train women to be health providers and educators. During his five-year tenure with the organization, he established seed funding and helped expand research and direct care programs that reached tens of thousands of rural residents.

As a research scientist, Dr. Murthy has conducted laboratory research on vaccine development and studied the participation of women and minorities in clinical trials. His research findings have been published in Science, the Journal of the American Medical Association, and the Journal of the National Cancer Institute. Dr. Murthy is also a healthcare entrepreneur and innovator. He co-founded and chaired a successful software technology company, TrialNetworks, which improves research collaboration and enhances the efficiency of clinical trials around the world. Over a period of seven years, Dr. Murthy and his team took the company from conception to an international enterprise that powers dozens of clinical trials for over 50,000 patients in more than 75 countries. Dr. Murthy also served as the president of Doctors for America, a non-profit organization comprised of more than 16,000 physicians and medical students in all 50 states who work with patients and policymakers to build a high quality, affordable healthcare system for all.

As a proven leader who will employ 21st century approaches and technology to modernize the role of the Surgeon General, Dr. Murthy plans to focus his efforts on building partnerships within communities and across numerous sectors of society to address the epidemics of obesity and tobacco-related disease, to reduce the stigma associated with mental illness, to improve vaccination rates and to make prevention and health promotion the backbone of a strong and healthy America. Dr. Murthy firmly believes that our nation's greatest asset has always been its people. And improving the health of the American people – and our neighbors around the world – will be Dr. Murthy’s highest priority as the U.S. Surgeon General.
Twitter Handle
@Surgeon_General
LinkedIn
https://www.linkedin.com/in/drvivekmurthy/ 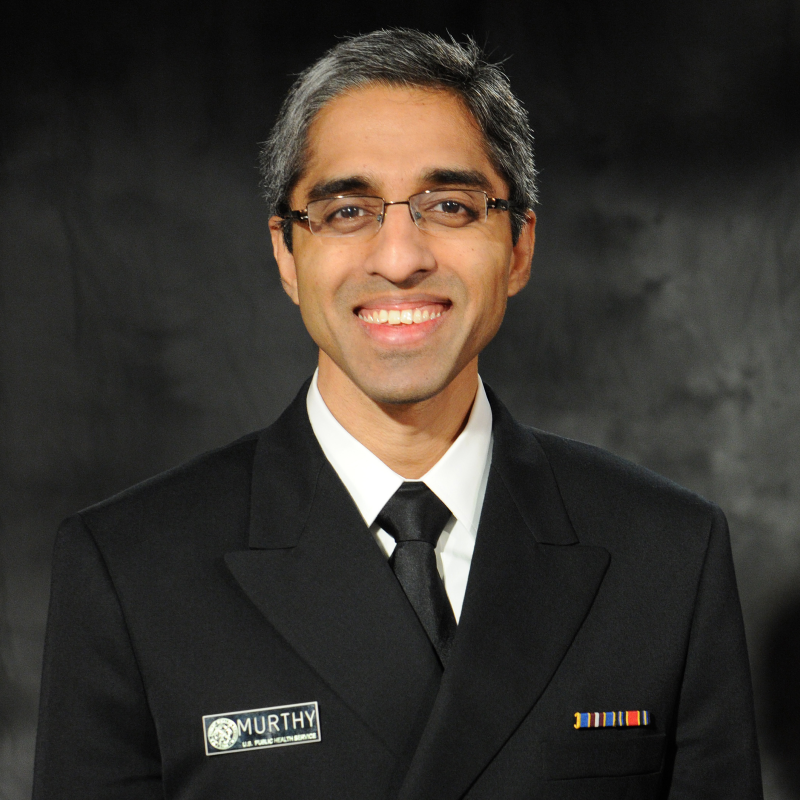