Prior to his recent work in the private sector, Mr. Simakovsky spent a decade in government across two administrations. His work at the Pentagon from 2007-2015 helped shepherd U.S. defense policy in Europe and Eurasia through a turbulent period. He served as the Europe/NATO Chief of Staff in the Office of the Secretary of Defense (OSD) for Policy, where he played a key role developing and implementing U.S. deterrence and reassurance measures in Europe in the wake of Russia’s 2014 invasion of Ukraine. Prior to this position, he was the Russia Country Director in OSD Policy, where he helped lead the Department’s response to the 2014 Ukraine crisis and drafted the Department’s post-conflict strategy for Russia.

In 2013, Mr. Simakovsky was a Brookings congressional national security fellow in the office of Senator Mark Warner (D-VA). From 2012-2013, Mr. Simakovsky served as the inaugural Ronald D. Asmus Non-Resident Policy Entrepreneur Fellow at the German Marshall Fund, traveling throughout Europe and publishing a NATO enlargement study. Mr. Simakovsky also served in the Pentagon as the Eurasia Strategy Advisor/NATO Coordinator from 2011-2012 and the Country Director for Georgia/Moldova from 2007-2011. In the latter position, he led the Pentagon’s response to Russia’s 2008 invasion of Georgia. Mr. Simakovsky began his government service in 2006 as a Presidential Management Fellow in the Office of Russian Affairs, Bureau for European and Eurasian Affairs, Department of State. 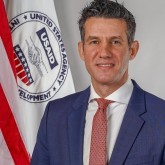